I think one point people often overlook when discussing common cloud API's is the overall maturity of API's for different types of cloud services.  Trying to achieve commonality on API's that have not yet reached maturity can be a frustrating and time-consuming effort.  So, how stable are the API's for common cloud computing services?  This article focuses on a couple of different measures of API maturity to try to answer that question.

One measure of API maturity is churn.  In other words, how much is the API changing.  Mature API's should show relatively small amounts of churn while immature, evolving API's will show increased levels of churn.  The chart below shows one measurement of churn, namely the growth in the API.  For HTTP-based API's, this can easily be measured by the number of different types of requests supported by the API. 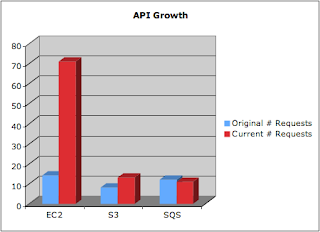 Another way to measure maturity is to compare similar API's offered by different vendors.  Mature API's should show a great deal of similarity among the different API's while immature API's will tend to show many differences.  The reasoning behind this is that a mature API should be based on a well-defined set of abstractions and therefore the type and number of API calls dealing with those abstractions should be similar across vendors.  In an immature API, the abstractions have not yet been fully fleshed out and you will see more variation among similar API's from different vendors. 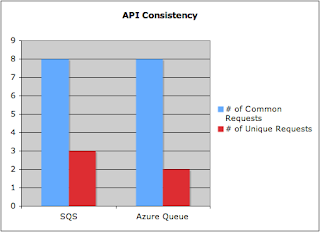 This graph is comparing the number of API requests that are common between the different vendors (shown in blue) versus the number of API requests that are unique in a particular vendor's API (shown in red).  An API request is considered common if both API's have similar requests with similar actions and side effects.  Large blue bars and small red bars indicate more consistent API's whereas large red bars and small blue bars indicate less inconsistent API's.  The graph shows a fairly high degree of consistency between the two different queue service API's. 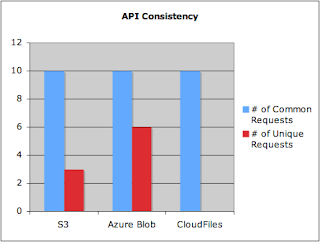 Again, we see a fairly high degree of consistency across all three API's.  The major difference is related to the Azure Blob service's handling of large Blob's.  It places a limit of 64 MB on individual pages within a Blob and allows multiple pages to be associated with a particular page.  The other services have no equivalent abstraction, hence the differences.
Now let's compare Amazon's EC2 service with Rackspace's CloudServers: 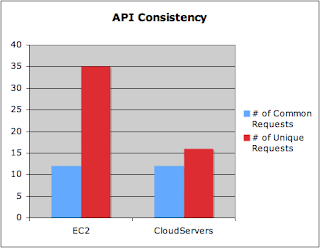 Here we see the opposite of the graphs for the queue and storage services.  The large red bars indicate a large number of API requests that are unique to a particular vendor's API and a relatively small number of API requests that are common across both vendors.  In fact, aside from the basic operations of listing instances, starting/stopping instances, and listing/creating and deleting available images, it was difficult to even compare the two API's.  The handling of IP addresses, networking, firewalls, security credentials, block storage, etc. were unique to each vendor.
So, does that mean that common cloud API's are impossible?  Of course not.  However, I do believe that achieving meaningful levels of functionality across multiple vendors API's (especially around servers) is building on a shifting and incomplete set of abstractions at this point.  Solidifying those abstractions is key to achieving useful interoperability.
Posted by Mitch Garnaat at 6:57 PM

Mitch Garnaat, that's who. I am